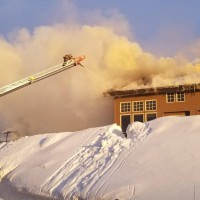 At about 4:00 pm on the Saturday of Presidents’ Day weekend a fire broke out in a unit of the Village at Sugarplum.  I had just returned home from skiing with my guests – my nephew Sam and his girlfriend Lauren were in town. I was clearing snow outside when Deputy Marshal Kevin Payne arrived to tell us we had to evacuate because of the risk to a gas line that was feeding the fire.  We left and went to the Alta Lodge where Mimi Levitt welcomed us to hang out and where Gregg Davis squeezed us into the full dining room so we could have dinner (and gave me a sandwich to take to Marshal Mike Morey).  Just as I was about to send Sam and Lauren to stay in the valley, we were allowed back home at around 10:00 pm.  After deploying numerous units from several fire stations, the Unified Fire Authority finally declared the fire extinguished by 5:00 am Sunday morning.

We were lucky – though three units at the Sugarplum were destroyed, and this was the biggest fire in Alta since the Hellgate burned in 2006, no one was injured and the UFA contained the fire to a single structure.  Thanks to quick thinking and fast adjustments in how water was delivered, Steve McIntosh and Keith Hansen made sure the UFA had plenty of water (they used about a quarter million gallons in fighting this fire).  Because of the holiday weekend, Alta’s Marshal Morey had scheduled three officers to be on duty that afternoon (Marshal Mike Morey and Deputy Marshals Kevin Payne and John Freeman). Rocky Mountain Power happened to be working in Alta so they could quickly help cut power to the buildings.  And Alta’s liaison officer with the UFA, Chief Jay Torgersen, who was scheduled to have the day off, happened to be skiing in Alta and brought his extensive knowledge of Little Cottonwood Canyon to the UFA team as soon as the fire was reported.

Things could have been worse:  If it had been snowing, bringing additional resources to Alta from the valley would have been challenging.  If the main line of SR 210 were closed, closing the Bypass Road to fight the fire would have been very disruptive.  If Chief Torgersen had not happened to have been in Alta, or if Marshal Morey hadn’t arranged for three officers to be on duty that day, public safety would have been harder to ensure.  And if this had happened in the summer, the surrounding buildings and forest would have been at much greater risk.

The fire seems to have started because of a post-meter gas line leak.  One of the people staying in the unit that caught fire returned from skiing to smell gas and to find the water heater was out.  Apparently the gas line was damaged by creeping snow against the back of the building, which is why the water heater was out – it wasn’t receiving gas because of the damaged line, and instead, the gas was accumulating in the wall of the building.  The guest attempted to relight the water heater and the wall ignited.  The gas finally was shut off when the roof heated enough that the snow slid off and severed the pre-meter gas line.  Severing the line there allowed large amounts of gas to flow out, triggering the automatic shut off valve, which worked as it was supposed to.  But by then the structure was ablaze.

Throughout the incident, I was in contact with Marshal Morey and with Chief Torgersen by phone, text, radio and, after they allowed me back to the area, by being on site.  The dedication, skill, professionalism, and compassion of their teams was impressive and moving.  I am proud that our community pulled together to keep an unfortunate situation from becoming a tragic one.