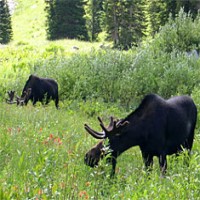 We have been enjoying a good ski season in Alta this year, with snowfall of more than 95% of average so far. With the winter weather, it might seem early to start thinking about the summer, but since planning has already begun, in this column I want to write about the upcoming summer season.

Last year, as most readers know, Alta Ski Lifts assumed control of the summer road and, more generally, much of Alta’s summer programming. Alta Ski Lifts decided to do this in part because of constraints on the Town’s ability to manage traffic. As a municipality, the Town of Alta could not legally restrict public access to the summer road, which is in fact a United States Forest Service road (officially, FR 028), nor could we create incentives for carpooling by charging for access to the parking areas along the road in Albion Basin. In addition, the annual increase in costs for the Town’s summer program was becoming unsustainable. Alta Ski Lifts, however, expected that, under their Special Use Permit with the USFS, they could implement a summer operations plan that includes such practices. Alta Ski Lifts consulted with the USFS last spring and received confirmation that they could run a pilot program to manage the summer road in concert with other aspects of a summer operation.

The Town and ASL then entered into an understanding that included among other things that ASL would operate the information booth at the end of SR210, limit traffic on the summer road, charge for parking in Albion Basin but not at their base facilities, run the Sunnyside lift or a shuttle on weekends and holidays, provide 24-hour access to ADA compliant restroom facilities, and engage in consultation with stakeholders (to include at least the Town of Alta, the USFS, and the Friends of Alta).

While the change was sudden, the results last year were generally positive. I want to thank the Town’s staff, Friends of Alta, the USFS, and Alta Ski Lifts for an admirable roll-out of a complex innovation. The Sunnyside chair operated on weekends and holidays, the Albion Grill was open for much of each day, and traffic on the summer road was managed effectively. I heard from many people in our community and many visitors who were positively impressed with the changes.

Councilmember Margaret Bourke, Assistant Town Administrator Chris Cawley, and Deputy Marshal James Chickvary, and I represented the Town at a stakeholders’ meeting last week hosted by ASL that also included Mr. Del Draper (an Albion Basin cabin owner) and representatives of the USFS and Salt Lake City Public Utilities. We had the opportunity to express our appreciation and our concerns.

This year, ASL is looking to make some adjustments to the summer program, including summer trail reroutes, adjustments to parking management, and restroom improvements. We will continue to work with ASL to make summer as enjoyable as possible.

Though glorious, and requiring some advance planning, here’s hoping that summer in Alta doesn’t come too soon and that we have many more days of powder skiing this winter!