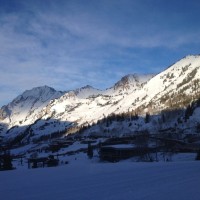 As many know, the CWC was formed last year by several entities that had participated in the Mountain Accord with the purpose of implementing the Accord. Although the Town of Alta (TOA) had participated extensively in the Mountain Accord, the town was not invited to join the CWC. After successfully lobbying to be added, the TOA joined the CWC this past August. There are now 10 members, all but one of whom are elected officials. In addition to me, Commissioners include: City Councilmember Chris McCandless, Sandy; Mayor Jackie Biskupski, Salt Lake City; County Councilmember Jim Bradley, Salt Lake County; Mayor Mike Peterson, Cottonwood Heights; Mayor Andy Beerman, Park City; Mayor Ben McAdams, Salt Lake County; County Councilmember Chris Robinson, Summit County; Mayor Jeff Silvestrini, Millcreek; and Carlos Braceras, Director of UDOT, who was appointed by Governor Herbert. Ralph Becker, who was Mayor of Salt Lake City during much of the Mountain Accord process, is the CWC’s Executive Director. You can find details about the Mountain Accord and the CWC here: mountainaccord.com and cwc.utah.gov.

The Mountain Accord was meant to facilitate the management of the central Wasatch area to allow some economic development (most obviously, by ski areas), while protecting the watersheds, the environment, and recreational opportunities. Of prime importance, as anyone who has come to Alta on a powder day knows, is transportation.

A key component of the Mountain Accord was land exchanges between four ski areas (Brighton, Solitude, Alta, and Snowbird) and the United States Forest Service (USFS). The NCRA would incorporate those exchanges and prohibit further ski area development onto federal lands. For the Alta Ski Lifts Company (ASL), the provisions of the Mountain Accord were complicated by several contingencies. ASL agreed that it would exchange its private holdings in Emma Ridge, Grizzly Gulch and Devil’s Castle, among other areas, for USFS property in the TOA’s commercial core contingent on:

Furthermore, Salt Lake City (SLC) agreed to provide the water for the hotel plus additional snowmaking water contingent on (among other things):

Finally, the endorsement of the Accord by various conservation and recreation interests was contingent on:

I think it is unfortunate, but the Mountain Accord for ASL proved to be less stable than hoped. With no clear connection to Big Cottonwood Canyon having been achieved, ASL determined that contingency #1 was not met and decided they would not include their private lands in Grizzly Gulch in the land exchange but would reserve them for potential expansion of their lift-served skiing. As this property is private, they have the right to retain it and, under current conditions, they could build a lift in Grizzly Gulch. The presence of USFS property adjacent to and within Grizzly Gulch but outside ASL’s Special Use Permit from the USFS complicates doing so. The Special Use Permit allows lift-served skiing only on specific areas of federal property, but ASL today can apply to expand its Special Use Permit to include those specific parcels. If they do apply, the conservation and recreation interests are likely to oppose the USFS granting the permit to expand.

The removal of Grizzly Gulch from the land exchange meant that contingency #3 would also not be met. SLC has stated its unwillingness to provide water without that contingency and, in addition, the conservation and recreation groups no longer would support the inclusion of any of ASL’s private property that is already within their Special Use Permit in a land exchange. The reason for this position is that according to the conservationists, recreationists and watershed managers, while privately held parcels within the Special Use Permit bring some financial value to the exchange, they bring less conservation value than land currently outside the ski areas.

Before I joined the CWC in August, the then current members had concluded that these problems threatened to undermine the whole Accord, and suggested moving forward with a partial implementation that would not include any land exchanges with ASL. I wasn’t ready to exclude our town’s ski area and so I moved to reopen the discussion and I thank the other members for agreeing to do so.

Fast forward to mid-November and there had been many proposals and counter proposals discussed by the various parties. Finally, two final offers were put on the table:

These two offers are substantially closer together than where things stood in August when I joined the CWC. So what’s the problem? ASL today has an option to apply to the USFS to expand its lift-served skiing onto Patsy Marley. ASL does not want to give up that option. I have asked ASL’s management how likely they think it is that the USFS would grant that expanded permit under current conditions, but I have not received a clear response to that question. The conservation and recreation interests insist that ASL would have to give up that option to participate in exchanges that do not include ASL’s private property in Grizzly Gulch. They have said that they do not think the USFS would grant ASL the permit to expand onto Patsy Marley because the current Forest Plan does not allow for ski area expansion.

In my opinion, it is unfortunate that a deal to protect 80,000 acres in the Central Wasatch seems to be foundering on less than 100 acres in the TOA that neither side should be confident about controlling. I have told both sides that I think that either final offer is better for both – and the Town of Alta – than an impasse, and it is my impression that a number of CWC members agree with me. But we have not persuaded the two sides.

Faced with the breakdown of a foundational piece of the Mountain Accord, the CWC reverted last month to consideration of a partial implementation, which had been agreed to by all parties as a default approach. My concern at that point was crafting an outcome that held ASL harmless relative to its current rights and opportunities and that did not complicate for no good reason land jurisdiction in the TOA. The most effective way to do this was to leave ASL’s current ski area boundaries, permitted areas and private lands, and the TOA entirely out of the NCRA and the legislation. Their views may have changed in the last couple of weeks, but as of mid-November all parties made it clear to me and to other members of the CWC that they could live with this outcome. I think that this outcome is not optimal, but it does seem to be the best outcome that is currently available.

As I see it, both ASL and the conservation and recreation interests were offered a deal that they each chose to reject. Doing so may mean that they give up attractive opportunities, but those opportunities were likely obtainable only under certain circumstances, which have not yet been met. The ASL and the conservation and recreation interests seem to think the trade-off is worth it, and that assessment is of course up to them.

I am hopeful that the process is not finished and that together we will find a way to move forward to a better outcome. In my experience, negotiations are generally not helped by aggrieved or accusatory public comments. Negotiations generally are helped, on the other hand, by each party understanding the point of view of the others. I urge all parties to continue to work together with good will and in good faith.