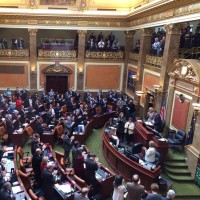 The Utah State Legislature meets annually for 6 weeks, beginning on Monday of the last week of January and running until early March. The current session has been underway since January 23rd and will end on March 9th.

Following the activities of the legislature during each session can be daunting, as the 6 week-long session is a constant flurry of activity on proposed legislation. As of February 2nd, there are 327 bills listed on the legislature’s website, and this number is certain to grow substantially as the session proceeds.

Local news sources, such as the Salt Lake Tribune and the Deseret News, are a great way to follow the hottest issues during each session. For a more comprehensive source of information on everything the legislature is up to, check out the legislature’s website, or check out the Utah League of Cities and Towns, a statewide municipal cooperative which advocates for local governments at the legislature.

Alta is represented in the Utah Legislature by the following individuals; please click through the links to find their contact information and to learn about your legislative districts: